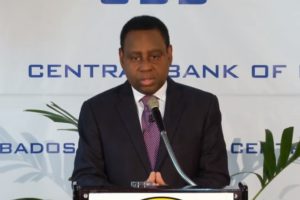 BRIDGETOWN, Barbados,  The Central Bank of Barbados is reporting some successes in the debt restructuring and public sector reform initiative under the Barbados Economic Recovery and Transformation (BERT) programme being implemented by government. But Governor Cleviston Haynes says the adjustment efforts are expected to dampen economic activity and the country is projected to record negative growth of 0.25 per cent to 0.75 per cent for 2018.

In his review of the economy up to September of this year, Haynes yesterday delivered good news in some areas. For instance, he said the slide in the country’s international reserves had abated. Gross reserves increased by $104 million between late March and the end of September, almost 80 per cent of which occurred from June, a month after the new government took office.

“The recovery in reserves was principally driven by the suspension of external debt service which alleviated pressure on foreign exchange outflows,” Haynes explained.

He also noted that the suspension resulted in interest payments being lowered by BDS$105 million (US$52.5 million), substantially cutting the share of revenue absorbed by interest payments.

Government has also been able to slash its capital spending and transfers and subsidies, a key requirement under the IMF-funded BERT programme; the pressure on the Central Bank to finance Government has eased considerably; and the new Fuel Tax which replaced Road Tax on July 1 this year has raised over BDS$8 million (US$4 million) since its inception.

The Central Bank Governor also noted that the abolition of the National Social Responsibility Levy (NSRL) was also paying off.

“Given the elimination of the NSRL, the inflation rate is expected to fall. The current forecast for inflation for 2018 and 2019 is now 4.3 per cent and 2.7 per cent, respectively,” he said, although noting that volatile oil prices remain a threat to the trajectory of the inflation rate.

Amid the encouraging indicators, however, the Central Bank said that economic growth remains a challenge.

“Preliminary data suggest that economic activity in Barbados contracted by 0.5 per cent during the first nine months of the year, as reduced activity in the construction sector and the impact of tighter fiscal policy on domestic consumption offset modest gains in the tourism sector.

“Long-stay tourist arrivals were 2.9 per cent higher than for the corresponding period of 2017 but the continued decline in average length of stay contained the increase to 1.4 per cent in tourism activity. The United States and Canadian markets registered growth of 8.7 per cent and three per cent, respectively. However, arrivals from the United Kingdom grew more modestly, as weaker economic growth and a relatively weak pound hampered growth in this market. Cruise arrivals also declined (2.9 per cent) as the number of cruise ship visits to the island fell by almost 10 per cent,” Haynes reported.

Output in the construction sector is also estimated to have declined significantly as there were no new large-scale private sector projects to replace a major hotel project that was completed in 2017. In addition, public sector infrastructural development also declined in the context of Government’s financing constraints and the consequent reduction in capital expenditure.

The Central Bank Governor said the outlook for the Barbados economy is for a sustained recovery and a strengthening of performance indicators over the medium term. However, he said, actual outcomes will be influenced by Government’s success in implementing the programme that it has agreed with the IMF.

“In this regard, meeting the targets under the programme criteria will unlock additional foreign inflows from the IMF and our multilateral partners and facilitate a further build-up of reserves,” Haynes said.

He cautioned that the adjustment efforts are expected to dampen economic activity.

“The Bank now expects negative growth of 0.25 to 0.75 per cent for 2018. Output in 2019 is forecast to be in the range of 0.5 per cent to one per cent, but the actual outcome will be influenced by the speed with which new investments, particularly in the private sector occur. These have the potential to absorb some of the labour that government is shedding,” Haynes said. 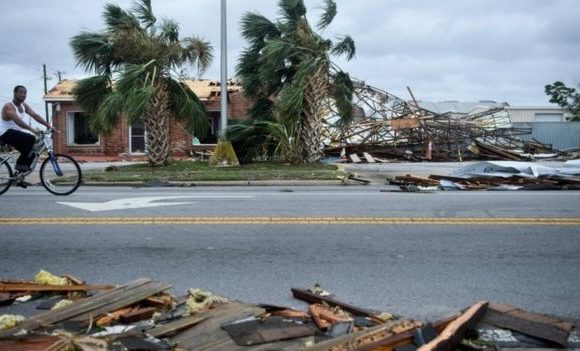