Bastie Samir handed Bukom Banku his first home defeat as a professional boxer in the 7th round of the much-touted bout on Saturday.

Bukom Banku held an impressive 29-0 record prior to the fight against the younger Bastie (15-0-1), who is also yet to lose a fight.

The much-awaited bout between two of Ghana’s finest fighters lived up to the pre-fight hype.

Braimah Kamoko, popularly known as Bukom Banku, had promised to knock out Bastie, who is popularly called “The Beast,” in the 6th round of the bout.

Banku will quickly forget the night at the ultramodern Bukom Boxing Arena in Accra since he was plummeted from all sides by his opponent.

Unlike Banku’s encounter with Ayite Powers, which the former dominated, the Saturday night encounter was a tough duel where he was sent to the canvas in the 7th round, and the referee had to come to his rescue to save him from further embarrassment from his younger opponent.

He began the fight as the more favourite of the two boxers and consolidated his dominance in the cruiserweight category by winning the first two rounds.

Bastie Samir, however, gave Bukom Banku a good run for his money in the third and fourth rounds by landing some good left and right hooks, which sent Banku to the floor in the fourth round to the delight of the spectators.

The fifth round did not see much action, as both fighters were beginning to show signs of fatigue.

Bukom Banku could not deliver on his promise of a technical knock Out (TKO) in the 6th round.

Both boxers used the round to basically avoid punches.

The Round 7 proved the ultimate, as Bastie Samir mercilessly landed a barrage of hooks and jabs at Bukom Banku, who struggled to put up a defence.

The referee inexplicably had to come to the rescue of Banku, who was bleeding heavily from a cut on the upper right eye, and later gave him the mandatory count.

Banku nodded in agreement to indicate that he was fine to continue the fight, but was immediately sent to the floor again, following a combination of some ruthless punches from ‘The Beast.’

The referee was left with no choice but to end the fight and declare Bastie Samir the winner of the non-title bout.

Both fighters took home GH¢100,000, with Bastie getting an additional GH¢5,000 from the mayor of Accra, Mohammed Adjei Sowah, for his splendid performance. 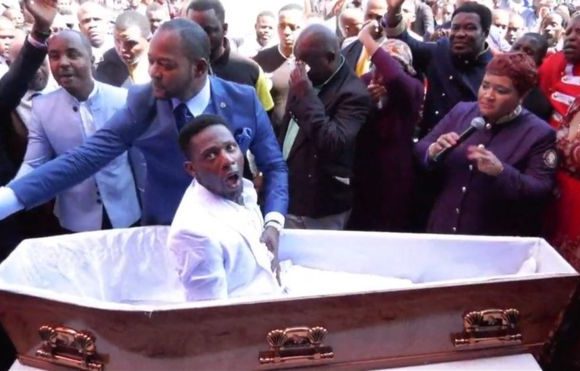