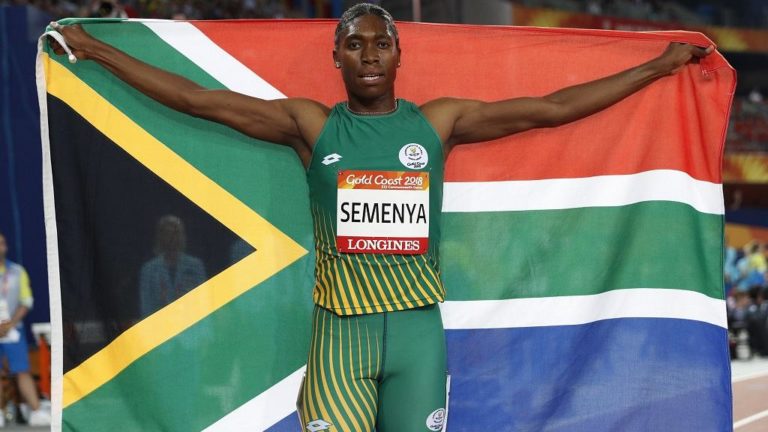 South Africa’s sports minister, Tokozile Xasa arrived in Switzerland to support Caster Semenya, saying her trip to the Alpine nation was aimed at offering support to her compatriot Semenya as the week-long hearing draws to a close.

“We are talking (about) violations of women’s bodies. Where women have to explain themselves for how they appear in the eyes of (others),” Xasa said.

Xasa said she had been asked to carry a message to Semenya from South African President Cyril Ramaphosa.

“Remember, you are great. Remember, that you are a symbol that constantly reminds us that nothing beats the enduring power of human spirit,” Xasa quoted the president as saying.

“We want to make sure that you don’t feel alone,” she added.

Last week the South African government launched a campaign dubbed #NaturallySuperior in a bid to drum up international support for Semenya’s fight against the rules which they have labelled “discriminatory”.

Xasa was wearing a t-shirt that said “we oppose IAAF regulations” and voiced hope the message would help drive the global campaign.

Semenya on Tuesday released her won list of experts from various fields, using the announcement of their names, through her lawyers, to reiterate her stance on the IAAF’s proposed regulations.

“The IAAF regulations do not empower anyone,” the statement said. “Rather, they represent yet another flawed and hurtful attempt to police the sex of female athletes.

The experts who will testify in support of Semenya are listed as:

South African double Olympic 800m champion Caster Semenya on Monday arrived for the start of a crucial hearing at the Court of Arbitration for Sport, in Lausanne, Switzerland.

Semenya started off by accusing the IAAF of breaching confidentiality rules of the hearing after they released the names of five expert witnesses they will bring to the CAS to testify on their behalf.

“The arbitration proceedings are subject to strict confidentiality provisions and this information should not have been released‚” Semenya’s lawyers said in a statement on Monday.

“As a matter of fairness Ms Semenya raised this issue with the CAS and has been granted permission to publicly release information responding to the IAAF press release‚ including disclosing the experts who are testifying in support of Ms Semenya’s case. This information will be released tomorrow.”

The IAAF named Dr Angelica Hirschberg, Professor of Obstetrics and Gynecology at the Karolinska Institutet, Stockholm, as a witness, along with David Handelsman, Professor of Reproductive Endocrinology and Andrology at the University of Sydney, and physicist Joanna Harper.

The other two witnesses will be Doriane Coleman, a Professor of Law at Duke Law School, and Richard Auchus, a former Professor of pharmacology at the University of Michigan.

The athlete is challenging a ruling of the International Association of Athletics Federation (IAAF)n that would force female athletes who have natural high levels of testosterone, to take drugs to lower this level before being allowed to compete in races from 400m to one mile.

Testosterone is a hormone that increases muscle mass, strength and haemoglobin, which affects endurance.

“The core value for the IAAF is the empowerment of girls and women through athletics. The regulations that we are introducing are there to protect the sanctity of fair and open competition and that’s really what we are here to defend, said Sebastien Coe, IAAF president.

The South African Athletics Federation is supporting Semenya, saying that such a rule is a negation of Semenya’s basic human rights.

“What’s at stake here is far more than the right to participate in a sport. Women’s bodies, their wellbeing, their ability to earn a livelihood, their very identity, their privacy, their sense of safety and belonging in the world are being questioned,’ argued Thokozile Xasa, South Africa’s minister of Sport.

The hearing is expected to last five days, with witnesses and experts testifying.

A final decision should be expected by the end of March, after a four-week deliberation.